Okay Folks! It’s been a while since I had a cake disaster and since the disasters are much more fun to write about than the successes, I have to skip sharing all the great cakes and share this one instead.

Inspired by my family’s Irish heritage and the Today Show’s cooking segment yesterday, I decided on Shepherd’s Pie with a Champ Mash topping and Guiness cake for supper. However, impending hail storms in the area yesterday made a trip to the local package store to buy the Guiness less than advisable.

Now this story does not involve any adjustments to the space/time continuum in my kitchen as last year’s king cake disaster did, but it does involve the need to improvise because of the weather. With the Guiness cake out of the picture, and my daughter calling for “something green” on the menu, I thought about the shamrock cupcakes I had seen on television yesterday morning. (We are out on spring break and morning news/entertainment is my guilty pleasure/time waster.)

I rummaged the pantry shelves looking for cupcake paper- I know there is a small package of them in there – but it has apparently gone into hiding. So, with time passing quickly and no way to do cupcakes I thought of doing a regular sized cake using the method they showed for the smaller version. To accomplish this, you have to use the paper in the cupcake pan so that you can place small rolls of foil or heatproof beads between the paper and the sides of the pan to squeeze the sides of the paper into the shamrock shape.  I should have used just a regular round cake pan I guess, but I thought the heart shaped pans I have would give at least two of the shamrock leaves a pretty, rounded shape and I would only have to shape the foil to pinch in the bottom leaf.

I cut two big pieces of parchment paper to line the pans (which I could have done for cupcakes but cutting 24small circles is much more time consuming than just two big sheets of parchment).  I got them in place with the rolls of foil on the sides and noticed that I might need to line the point of the heart shaped pans with a roll of foil too – since it was pointed after all. That was trickier than I expected and the clock was ticking – the mash was almost done and I only had just enough time to bake the cake before  I would need to assemble the shepard’s pie and put it in the oven.  So I abandoned lining the bottom point of the pans and convinced myself that the parchment being pinched on the sides would round it out anyway. Ummm- yeah.

So batter (box of store bought butter yellow with a teaspoon of cream de menthe candy flavoring and some green food coloring added) went into the pans and I shoved them in the oven.

Twenty five minutes later, this came out of my oven:

I snapped the picture and texted my mom and my sister – always my partners in crime and hilarity – and asked, “shamrock or leprechaun’s …?” (Use your imagination people.)

The texts themselves were truly hilarious and continued I as I debated conducting a bris for the cake and my teenagers argued over who would get to eat the cut off part.   I finally just iced it – and my daughter wrote “kiss me” on top in chocolate morsels.

My husband even laughed and since he is the most Irish of us (he argues that my red hair and green eyes don’t count because I’m more Scottswoman than Irish) we asked him to bless the food. Heaven knows we all needed to be blessed at that point – well, maybe just forgiven. His blessing began and I heard a rare thing – spontaneous verse – in true Irish form spilled from his lips and gave us all the joy we needed.

My husband once said my china pattern belonged to an old woman – I told him to stick around for fifty years and it would match. 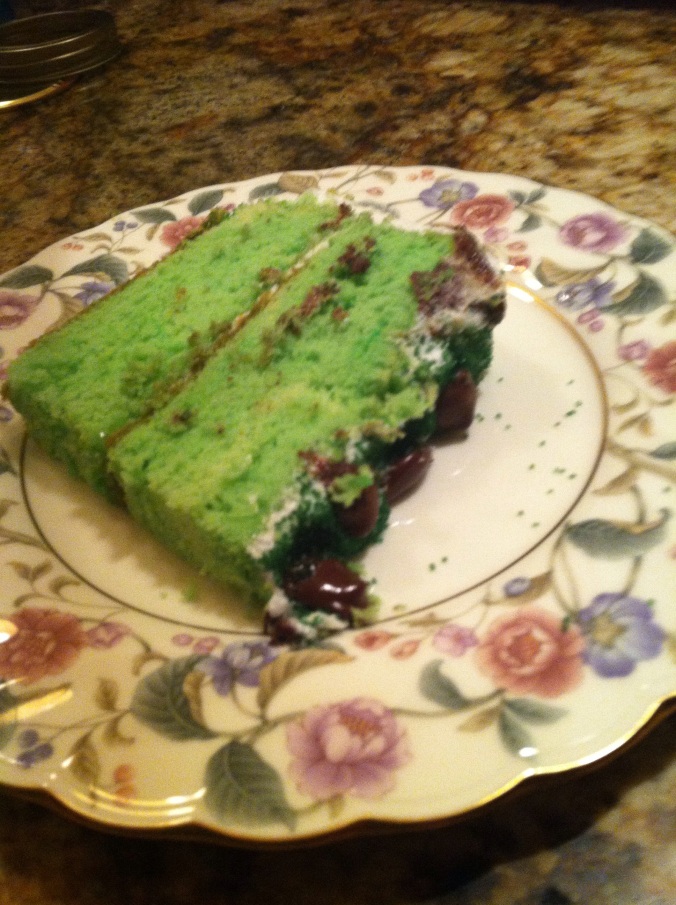 We finished the night by watching Leap Year- which I always giggle through-while we ate our shamrock cake. It was delicious if you were wondering.

My sister has promised to blog our text messages since she is the media queen – go check them out on her blog Imperfectly Nice – if you are brave enough.

Family and Friends of Mine who have Blogs:
Improperly Nice
Random Thoughts from a Morning Run

Parenting and Life in General:
Tell it Slant Mama
A Leaf In Springtime

Food:
Jamie Cooks It Up
100 Days of Real Food